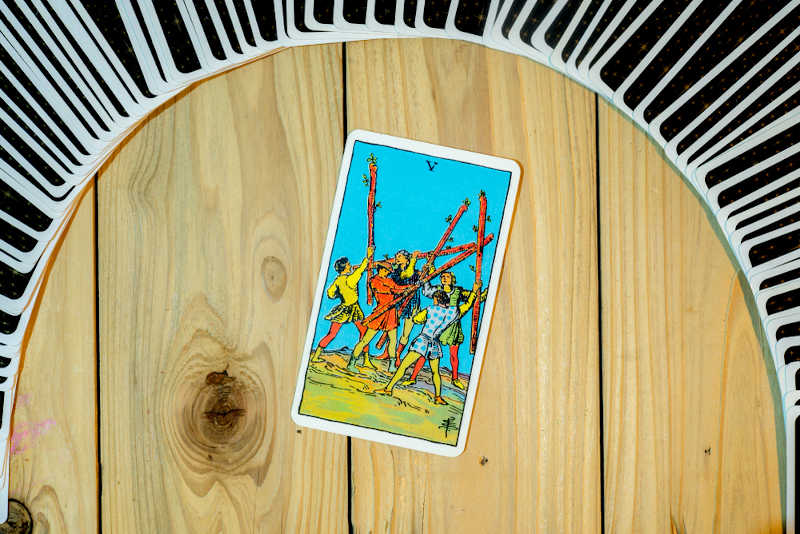 In the Minor Arcana, the Fives are some of the most challenging cards. If you view every suit as a self-contained story, the “plot” of each suit ramps up in a fairly predictable fashion. Fives are right in the middle of the progression from Ace to Ten, and so represent the climax of the action.

These cards depict the height of crisis, struggle, conflict, and action. Where the Four of Wands shows celebration, harmony, tradition, and a stable community, Five launches us into an all-out brawl.

About Five of Wands

In decks inspired by the Rider-Waite-Smith tarot, the Five of Wands is typically represented by some kind of physical fight.

In the Rider-Waite-Smith tarot itself, artist Pamela Colman Smith illustrated this card as five men, each brandishing a long, sturdy wand, ready to rumble. They’re all dressed in different colors and patterns, showing that they represent five different sides. There are no teams here — it’s every man for himself.

Notably, there’s nothing in the foreground or background. There’s just green ground beneath the fighters, and blue sky behind them. There’s nothing to focus on except for their conflict. The nature of this conflict is left up to the diviner’s interpretation. Are they fighting to the death, or is this some kind of sport?

Wands typically aren’t deadly weapons, but there’s no way of knowing exactly how dire this situation is. The diviner needs to look to other cards to provide some kind of context.

When this card appears, it’s a sign of some kind of struggle. There’s a of clash of personalities that’s leading to conflicts and arguments. This situation is beyond tension at this point — things have built up until they’re boiling over. Expect significant disagreements.

In some contexts, it can represent partaking in sports. This is especially true of full-contact sports, like football or rugby.

When the Five of Wands is reversed, things are starting to cool off. Anxiety and tension have built up, been released, and things are now calming down again. You may still feel a little hypervigilant or on edge, but the conflict itself is over.

This card may also represent avoidance. Some people try to stay away from any kind of conflict for the sake of their own safety and sanity. Unfortunately, that’s not always a healthy or effective coping mechanism. In this case, conflict may eventually be unavoidable.

The Five of Wands has pretty much the same meaning in a love spread as it does in a general reading. Expect conflict and arguments. This may be new, but also might be the result of simmering, built-up frustrations. These conflicts don’t need to spell the end of the relationship, but they must be attended to.

If you’re single, then you may feel that you’re being pulled in several different directions right now. Dating may feel chaotic, and you might have multiple parties vying for your attention.

When the Five of Wands is reversed in a love and relationships reading, it means one of two things: Either you and your partner are coming out of a difficult, argumentative period, or you’re both desperately trying to avoid venting your long-standing frustrations.

Look at your relationship as objectively as you can. Are you experiencing relief and release right now, or are you just repressing yourself in order to keep the peace?

If you’re single, this card can represent coming out of a complicated, chaotic period. You may also feel that you don’t have as many options as you once did, which is sucking some of the fun out of dating.

The Five of Wands upright has the same meaning for careers and business as it does in other readings: Conflict. This can mean two different things in a business context.

On one hand, you may be experiencing struggles at work, with your supervisor, or between co-workers. There might be a lot of friction and arguments about how things should be done. It can contribute to a very tense atmosphere, but remember that these arguments are only a symptom of long-standing tension, not the cause.

On the other hand, this card can also stand for competition. If you’re in a very competitive field, you may feel that the pressure is on for you to perform at your best. Look to the surrounding cards for advice and potential outcomes.

In a financial context, the Five of Wands signifies that you’re probably struggling at the moment. It may seem that there isn’t enough money to go around, so you have multiple expenses vying for your attention. It can also stand for disagreements about money, such as squabbling among heirs or arguments between spouses.

When reversed in a career and business reading, the Five of Wands indicates that you’re entering a more peaceful period after a lot of conflict. You might be having an easier time with your co-workers right now, or just feel less pressure from your supervisors.

In some fields, this card may represent a lack of competitiveness. You may not feel that you have what it takes to succeed in a cutthroat business, or simply don’t have it in your nature. This card may even indicate a change in career from a highly competitive field to a calmer, slower-moving one.

For financial readings, the Five of Wands reversed typically indicates that financial struggles are letting up. There are no longer multiple creditors vying for your last dollar, so you may have some breathing room and a little less money anxiety. It can also indicate that arguments centered around money have stopped for the time being.

Five of Wands: Yes or No?

In a simple “Yes or No” reading, the Five of Wands is a “No.” Fives typically represent struggle and conflict, so they’re usually not good omens for getting what you want. The same is true of the Five of Wands. You’re likely to be in a frustrating, challenging position right now, and you aren’t likely to receive the desired outcome.

When reversed, the Five of Wands can become a “Yes!” In this case, the struggle is ending. You’re seeing the light at the end of the tunnel, finally have time to relax, and things are looking up. Your query is likely to have a positive outcome.

No matter where or how it shows up, the Five of Wands represents one thing: Struggle. There are no ifs, ands, or buts about it. Just as the card has nothing in the foreground or background to distract from the young men battling it out with their wands, there aren’t really a lot of other interpretations.

When it’s upright, expect arguments, disagreements, and outright fights. When it’s reversed, these fights are coming to an end — though whether that’s due to healthy communication or emotional repression is up to you.