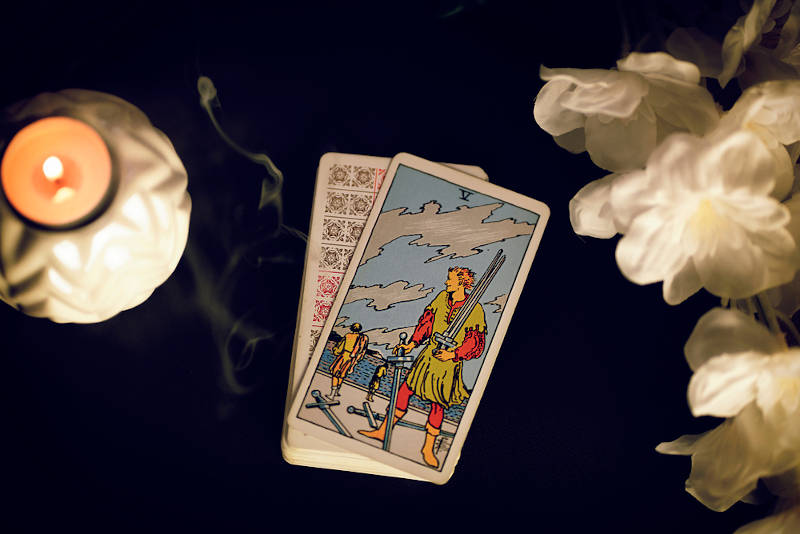 Each suit of the Minor Arcana has its own element and sphere of influence. For the suit of Swords, that’s Air and the intellect. This is the card of logical thought, clarity, and “cutting to the heart” of a matter.

Since the pips cards of each suit form a story, the progression of the story of Swords deals with these themes. The story begins with the Ace, and reaches its conclusion with Ten. That means that the Five of Sword is where this suit’s action is highest. It’s the crisis point and key conflict.

About Five of Swords

The Five of Swords depicts intimidation and aggression. Pamela Colman Smith illustrated this card as a man holding three swords, with two more on the ground around him. He stands haughtily, aggressively staring down two figures that are walking away from him. These figures appear to be slightly hunched — it’s easy to read an attitude of defeat in their postures.

There isn’t much in the foreground or background, almost all of the focus is on the winner of this conflict. There is an image of a sea in the distance, and a few clouds in the sky. These aren’t peaceful, puffy, cottony clouds, either. The sky is blue, but the clouds are gray and smeared as if pushed by high winds.

The battle between the figures in the card is ostensibly over, but is it really? The winner still stands in a posture of aggression and contempt. He isn’t focused on the swords in his hand, or even occupied with picking up the two on the ground.

All of his attention is on the two men he’s defeated. The sky above just serves to highlight the atmosphere of tension here. This is a card of conflict and stress between people.

When the Five of Swords appears upright in a general reading, it’s a sign of surrender, defeat, or some kind of loss. Even if you think you’ve won, it’s likely to be a pyrrhic victory at best.

You might be defending yourself and doing what you feel is necessary, but winning this fight will come at a high cost.

This card frequently appears in situations that feature physical violence, including fights, assaults, abuse, or crime.

When reversed, the Five of Swords is a mixed bag. Overall, it still represents the problems of the Five of Swords upright, just in a subdued sense. The undercurrent of conflict and violence is still there, but it may either be cooling down or ramping up.

This is a card of stress and tension. It’s either the tension of a slowly deescalating situation, or one that’s growing toward a crisis point. Violence isn’t erupting, but it might just not be erupting yet. Look to the surrounding cards for context.

The Five of Swords is a legitimately bad card to get in a love and relationship context. It very often refers to fights with a physical element, so it can stand for arguments that escalate into violence, or outright abuse.

At best, it indicates that the atmosphere is tense and uncomfortable. Fights might start at the drop of a hat. Examine your relationship and your feelings — are you afraid of your partner? Are they afraid of you? What is the source of this tension, and can it be resolved?

If you’re single, then this also isn’t a great omen for dating. You might be seeking out people who you read as “bad,” and are attracted to their dark sides. While this personality type can be exciting, it often isn’t a good basis for a relationship. Be careful not to put yourself in a dangerous situation.

The Five of Swords reversed can be tough to interpret in a relationship context. Depending on where you stand at the moment, it may either represent the calming down of tensions between you and your partner, or a slowly-simmering conflict.

The suit of Swords represents clarity and justice, and these things may have broken down. You might feel regret or remorse for the arguments you and your partner have had, or feel like you’re sitting on a powder keg waiting for someone to blow their top.

In either case, the message is clear: Take an objective look at your situation, and see where you need to put in work. Is it time to lay down your swords and reach an understanding, or get away before things escalate?

If you’re single, this card can represent a critical attitude toward a potential partner. You may have been self-sabotaging, behaving defensively and driving others away. This card can indicate that some of your walls are starting to come down.

In a career and business sense, the Five of Swords is all about tension and conflict. Expect a lot of butting heads. Though this card commonly represents physical violence, it can also stand for deception, underhanded dealings, and sabotage. Even if someone isn’t raising a hand to you, they can still attack you in other ways.

In some situations, the calls may be coming from inside of the house. If someone seems to be sabotaging you, make sure it isn’t you.

For financial readings, the Five of Swords upright indicates that there may be some deception going on. Be careful with trusting other people. If you’re experiencing a lot of money woes, they may also lead to arguments with your partner or family.

As in other readings, the Five of Swords reversed in a career or business spread can indicate that tensions are finally resolving. Hardheaded people are backing down, compromises are being made, and co-workers are finally communicating again.

On the other hand, it may indicate the beginning of a difficult situation. Tension might be rising, potentially leading to a total breakdown in communication.

Financially, this card may represent accountability. If others around you are being exposed for fraudulent behavior, make sure your nose is clean. Arguments and stress surrounding money should be calming down right now, but it’s still a good idea to be careful with spending and investments.

Five of Swords: Yes or No?

The Five of Swords is a “No.” Even when it represents a victory, it’s hard-won after heavy losses. This isn’t a positive card in general, so it indicates that you’re not going to get the outcome you’re hoping for.

Reversed, the Five of Swords can indicate a tentative “Yes.” This card often represents a situation that’s cooling off and deescalating, but still isn’t great for a “Yes or No” reading. You may get the outcome you want, but it won’t be as good as you’d hoped.

The Five of Swords is never a pleasant card. Upright, it’s all about fights, violence, and situations nobody ever wants to be in. Reversed, this energy is still there, just less so. Be careful whenever it appears. It calls for you to observe your situation with detachment and clarity, and make choices that will help you stay safe.