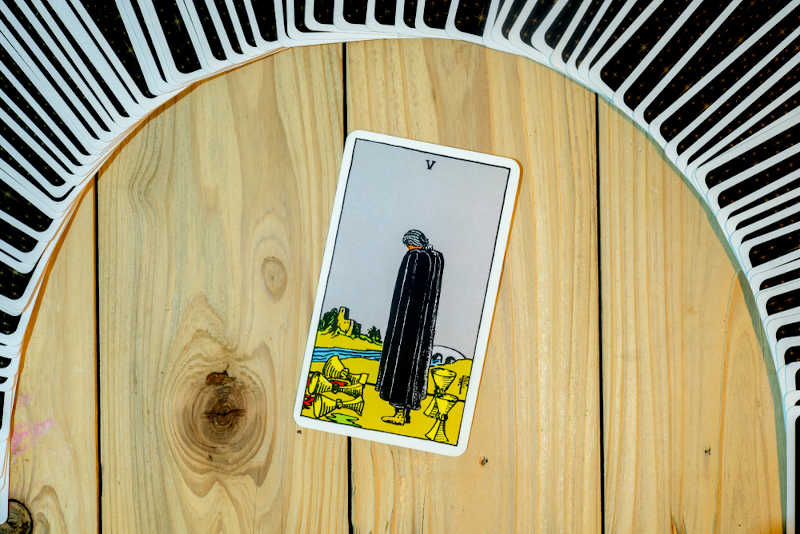 Every suit in the Minor Arcana tells a story. Aces mark the beginning, Twos are when plans and elements come together, and everything ramps up to a climax, then progresses to the dénouement.

Fives are when things reach a boiling point. In the suit of Cups, which is governed by the element of Water and represents the emotions, this means a stage of deep grief and emotional crisis.

About Five of Cups

The Five of Cups is unambiguously about grief and loss. In the Rider-Waite-Smith tarot, it’s illustrated as a figure in a long black cloak. While the viewer can’t see the figure’s face, they’re hunched over with their face buried in their cloak. They may be trying to hide tears.

In the foreground, five cups are visible. Three are tipped on their sides, with puddles of red and green liquid on the ground around them. Two sit behind the cloaked figure, still upright.

In the background, there’s a bridge over a small stream. As was mentioned above, the suit of Cups is tied to the element of Water. This element is said to govern feelings. Behind the stream, there’s a building. It doesn’t resemble the towns and cities that appear in Pamela Colman Smith’s illustrations for the other tarot cards, and it may actually be a ruin.

Taken together, there’s a cloaked, probably crying figure standing amidst five golden goblets. Three are spilled and empty, but two still remain. The figure doesn’t seem to notice the two goblets that haven’t spilled, and has chosen to focus on the three that have.

The presence of the stream indicates that this person could refill their spilled cups at any time, but is taking time to mourn their loss first. This isn’t a bad thing, but, if they choose to stay in this phase, they’ll never get around to refilling their goblets.

The Five of Cups indicates the presence of a lot of negative emotions. The figure is alone, so you may be feeling lonely. They’re mourning, so you may be grieving a loss. They’ve suffered a material loss, so you may be experiencing feelings of insecurity or a lack of safety. Fives are a crisis point, and this is an emotional emergency.

Fortunately, not everything may be as negative as it seems. Much like the cloaked figure, you may be focusing on what you’ve lost instead of what you still have. This isn’t to say that you aren’t allowed to mourn — just don’t lose yourself to grief. You still have good things in your life, and they should be remembered.

When reversed, the Five of Cups can stand for one of two things. Either you’re moving past grief and into healing and acceptance, or you’re repressing feelings of sadness or loneliness.

In most cases, this card is positive. You’re likely emerging from a period of sadness, and are now ready to reengage with the world.

In a love and relationship reading, the Five of Cups isn’t a good omen. It can indicate going through a difficult breakup, mourning a past love, or even just feeling very alone in your current relationship. No matter what situation you’re in, it’s coming with a lot of unpleasant feelings attached.

If you’re single, this isn’t an easy time for you, either. You might feel that you’ve missed your chance at true love, or just feel very alone and socially isolated. Take this time to sort through your feelings, but don’t wallow in them. You haven’t missed your chance. Just like the cloaked figure still has two cups remaining, you’re still able to find love if you try.

If the Five of Cups shows up reversed in a love reading, it can signify that you’ve gone through a very rough patch with your partner. You may soon be entering a stage of your healing process where you’re able to forgive each other and move on. While it’s not entirely a positive card, it indicates healing, forgiveness, and growth in this context.

On the flip side, it can also hint that you might have some repressed feelings. You may not feel that you’re able to grieve, which is holding you in an unhealthy emotional pattern.

If you’re single, then the Five of Cups can represent moving through sadness, regret, and loneliness. You’ve let go of what you needed to release and are now able to move on.

In a career or business context, the Five of Cups upright represents some kind of loss. This could be a financial loss, the closing of a business, or some other situation that causes deep feelings of sadness and regret.

While this change is unfortunate and unwelcome, all isn’t lost. There are still positive things to hold onto. Stay connected to the positive, and you’ll be able to salvage more than you expect.

Financially, this card typically represents a loss. Now isn’t a good time to make impulsive purchases or investments. Since this card is tied to grieving, it can also represent funerary expenses.

When the Five of Cups appears reversed in a business or career reading, it can represent rebuilding. You’ve managed to salvage some of your connections, knowledge, or other assets from your last setback, and you’re starting to recover. Expect your sadness, regret, and anxiety to subside.

In a money reading, the Five of Cups reversed often indicates that financial troubles are starting to ease up. It isn’t a good idea to go on a spending spree or making a lot of investments just yet, but you’re entering a better, calmer phase nonetheless.

Five of Cups: Yes or No?

Fives are tough cards to get in “Yes or No” readings. The Five of Cups is about grief and loss, so it’s a “No.” This isn’t a situation where you’re going to get what you want.

If the Five of Cups appears reversed, then it becomes a “Yes.” This “Yes” might not be entirely positive — the Five of Cups reversed indicates re-emerging from a period of deep sadness, after all — but it’s a “Yes” nonetheless. You’re probably going to get the outcome that you desire, but getting there might be rough.

The Five of Cups is a difficult card to get in a reading. Upright, it means that you’re going through terrible grief, regret, remorse, or emotional pain. Reversed, it shows that you’ve recently gone through terrible pain, but are starting to recover.

Don’t be like the figure depicted on the card — never lose sight of the good things in your life or surrender your power to improve your situation.