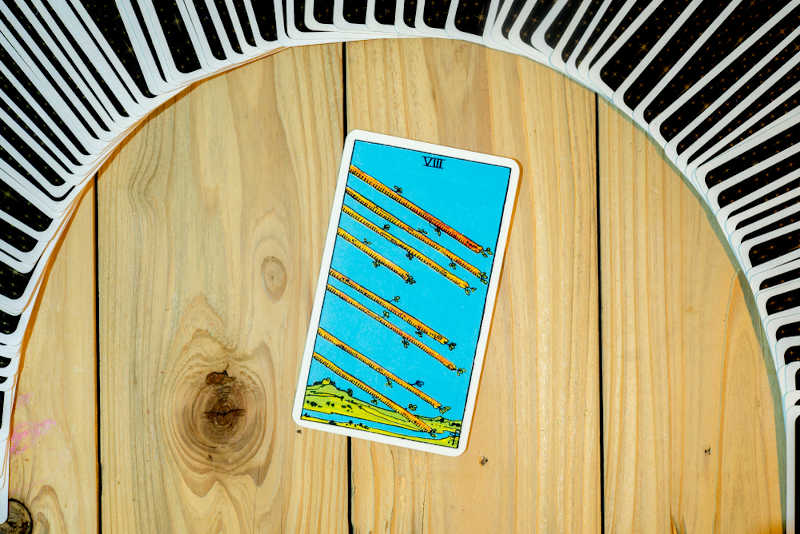 In the Minor Arcana, the Eights cards are where the action resumes. After the challenges embodied by Seven, Eight marks the beginning of some real forward momentum. Nowhere is this more evident than in the Eight of Wands. It’s all about progress and motion.

About Eight of Wands

The Eight of Wands is an interesting image. In the Rider-Waite-Smith tarot, it’s one of the only cards that has no figures in it — no people, no animals. Instead, we have an image of eight wands. They look like they’ve been thrown, like javelins, though we don’t see a thrower.

Only half of each wand is pictured here, so it’s hard to tell which direction they’re moving in — they slant downward from left to right. Are they moving up and to the left, or are they beginning their descent to the right?

In the background, we can see a lush green hillside and a calm stream. The sky above is blue and cloudless. There are no clouds to indicate strife, or mountains to represent obstacles.

The hillside is to the left, which hints that these wands may be flying away from a challenge in the past. There doesn’t seem to be anything impeding their flight at all. The coast is clear, and they’re on the move.

In a general spread, the Eight of Wands is all motion and progress. It’s generally a good sign, but this depends on the surrounding cards and context. Whatever you focus your attention on will proceed very quickly. Make sure you’re able to stay on top of things, because you might get swept away otherwise!

This card can also sometimes represent travel. It may indicate that you’re going to be meeting a lot of people, attending a lot of events, and generally be “on the go” for a while.

When reversed, the Eight of Wands is about patience, delays, and slowness. Progress might still be happening, but at a slower speed. You might be feeling a lack of energy, or the stars may simply not align for what you want to do.

In some contexts, this card can also represent being carried away. You might be following your impulses, without any thought to planning or timing. In either case, this card stands for things moving at the wrong pace. They are either going out of control or moving too slowly.

In a love reading, the Eight of Wands is a very nice card to get. Things will be moving quickly — your relationship will progress fast, and you may feel as though you’ve been swept off of your feet. Expect a lot of passion and enthusiasm, and possibly even a romantic trip.

If you’re single, this card can still herald lots of passion for you. You might meet someone and fall head over heels, or simply feel surrounded by excitement and motion.

When the Eight of Wands is reversed in a love or relationship spread, things aren’t going according to plan. You may feel like your momentum is faltering. Things might not be progressing quickly enough, if at all, or the passion and excitement may be fizzling out.

Following the general meaning of the Eight of Wands reversed, it can also represent things moving too quickly for you. No matter what the situation is, it’s time to communicate with your partner about where your relationship is heading.

For single people, the Eight of Wands reversed indicates a loss of enthusiasm. If you’ve met someone you’re infatuated with, reality may set in and cause you to lose interest. You may also find that you’re just no longer riding a wave of excitement.

For career- and business-minded spreads, the Eight of Wands can represent travel. It also indicates rapid progress, developments, and a fast-paced environment. Expect to be running around a lot, either literally or metaphorically.

Remember, however, that the wands in the Eight of Wands appear to be thrown. Don’t just blindly strike out and hope for the energy and momentum of your situation to carry you. Carefully take aim at your goals if you want to take advantage of this opportunity for success. The momentum is there, but it can still be misapplied.

In financial readings, this can represent investments taking off, or dabbling in multiple money-making ventures. This isn’t an excuse to invest in shady or risky business dealings — make sure you diligently research anything you invest in before making a move.

In general, the Eight of Wands reversed isn’t a good omen for career or business readings. It can either mean that things are moving too quickly and getting ahead of you, or aren’t moving quickly enough.

This card can represent poor timing and a lack of planning. You might find that you’re suddenly plunged into an environment you have difficulty keeping up with, or, alternatively, feel like you’re stagnating.

For money spreads, the Eight of Wands reversed indicates that your finances are progressing slowly. You might have trouble saving money, or find that your investments aren’t growing as quickly as you’d like. Avoid the temptation to invest in riskier ventures. They’re not likely to pay off the way you hope.

Eight of Wands: Yes or No?

In a one-card, “Yes or No” reading, the Eight of Wands is a “Yes.” This is a card of movement and progress, and whatever you’ve been focusing your attention on will benefit from that. If you’re investing your effort on your desired outcome, you’ll receive it.

Reversed, the Eight of Wands is either a “Maybe” or a “No.” Things either aren’t going to turn out the way you’d hoped, or you’re not going to see results for a while yet. This card is all about delays and misdirected progress, so things aren’t looking good either way.

The Eight of Wands represents speed. When it’s upright, that speed is just right for you — neither too fast nor too slow, and things are progressing in a way that feels fresh and exciting. It’s easy to be optimistic and enjoy yourself here.

When this card is reversed, everything seems to be moving at the exact wrong speed. It’s either not moving at all, or going so quickly that it’s running you ragged.

This card is an excellent barometer of the energy that’s surrounding your situation. Look to the surrounding cards to provide more context and specifics.