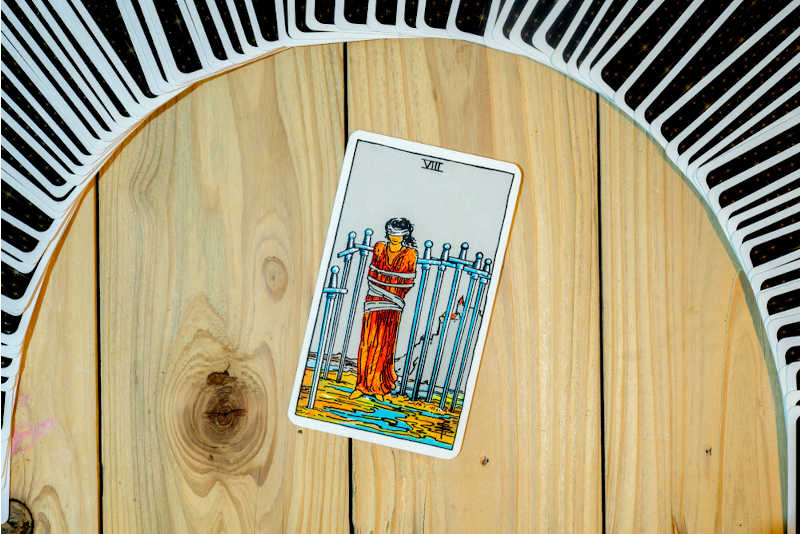 In the Minor Arcana, Eights are the beginning of the end. These cards represent movement, choices, and a final opportunity to correct your course of action. They’re very active cards.

For the Eight of Swords, this can mean chafing under confinement. This card describes feeling stuck, or having a dilemma with no good outcome. It’s the last chance to free oneself and avoid the fate described by the Nine and Ten of Swords.

About Eight of Swords

Different tarot decks illustrate their cards in very varied ways, but many of them are based on the Rider-Waite-Smith deck. In this deck, artist Pamela Colman Smith depicts the Eight of Swords as a red-robed figure bound and blindfolded. The figure stands surrounded by eight swords stuck into the ground, like a fence.

This “fence” isn’t complete, however, and the swords are only stuck into the dirt tip-first. If the figure could remove their blindfold, they’d see that they aren’t actually trapped — they could walk out of the circle easily, or take one of the swords for themselves.

The foreground and background of this card hold a lot of symbolic imagery. There’s water in the background in the form of a pond or stream, and more sitting in puddles at the bound figure’s feet. The puddles are small, split up, and unable to flow, which indicates scattered feelings and emotional stagnation.

The sky is also gray and oppressive, almost matching the mountain and castle far in the distance. The entire image conjures feelings of indecision, stagnation, and a lack of movement.

The village, mountain, and sky almost blending into each other can be significant here. The central figure is paralyzed by indecision, and unable to see any good resolution to their problem. The freedom embodied by the sky, safety symbolized by the castle, and obstacles represented by the mountain all blend together into an indistinct gray wall.

In a general reading, the appearance of the Eight of Swords upright indicates feeling like you’ve been trapped. You may have a choice to make, but feel paralyzed by indecision. Some external factor might be silencing you or tying your hands.

While this might seem to run counter to the idea of Eights as representing motion, the truth is that the potential for motion is still here.

The imprisonment is almost entirely self-imposed — the figure in the image can step out of the circle of swords or cut their bonds and untie their blindfold at any time. If you can stifle your fear and accept the consequences, you can free yourself at any time.

When the Eight of Swords is reversed, it signifies that you’re prepared to endure what you must in order to be free.

You may be experiencing release right now, or will soon. It indicates that you’re taking control over your situation again, even though it may cause you some short-term pain.

As with other Eight cards, this reversal can have a dual meaning. While it may represent release and new freedom on one hand, it can also represent tightening restrictions on the other.

The upright Eight of Swords is a fairly bad omen to see in love and relationship spreads. Since it represents feeling trapped or restricted, it may indicate a controlling partner, or a situation that keeps you penned in a relationship that you’d much rather leave.

At worst, it may represent abuse. At best, it can point to feelings of obligation or monetary insecurity that make you rely on your partner too much to leave.

If you’re single, this card can indicate feelings of being trapped in life. You might be looking for a partner to come in, remove your ties and blindfold, and pull up the swords for you. Unfortunately, that’s not likely to happen. Even if it was, that isn’t a fair expectation to have. Free yourself first.

The Eight of Swords reversed can be either a good omen, or a very bad one. In a positive light, it can represent the release of restrictions and fear, or the embrace of freedom. In a negative light, it may point to heavy oppression (or even a deep depression).

For single people, this card can represent either letting go of anxiety, or succumbing to it. This will affect your relationships, but you should look to the cards surrounding this one for more context.

For career and business readings, the Eight of Swords upright says that you’re feeling trapped in your job. You might feel that you depend on this job for financial security, or simply won’t be able to find another if you leave.

In reality, you’re not as stuck as you feel. You have the ability to choose a different path, but doing so will require you to overcome your fears.

Financially, the Eight of Swords indicates stagnation. You might feel trapped by your financial situation (which could, in turn, keep you tied to a job you hate), or even experience anxiety related to it. This anxiety can turn into a vicious cycle that keeps you in place.

As with other interpretations of the Eight of Swords reversed, this card can be a mixed bag for career readings. It can mean that you’re experiencing less pressure and restriction at work, and no longer feel trapped.

It may also indicate that you’re struggling under intense feelings of anxiety, depression, or restriction. Examine your feelings and know that you can leave a situation that makes you deeply unhappy.

In money readings, the Eight of Swords reversed depicts your level of financial anxiety. Either you’re learning to let go of your fears, or you’re fighting a losing battle against them. In either case, this card asks you to explore your feelings about money and determine how they may be affecting your bank account.

Eight of Swords: Yes or No?

The Eight of Swords isn’t a great sign in a “Yes or No” reading. Since it’s a card of (often self-imposed) restriction, it indicates that things aren’t going to turn out the way you want. In general, it’s going to be a “No.”

Reversed, this card becomes a symbol of freedom. This freedom might come at a high cost, and you may have some tough decisions to make, but you’ll be released soon enough. Expect the answer to your query to be “Yes!”

The Eight of Swords is a tough card to get. At best, it shows that you’re emerging from a very oppressive atmosphere and entering one that’s less so. At worst, it points to abuse, depression, and feeling imprisoned by your circumstances.

No matter how it appears for you, remember: You have the power to change this.