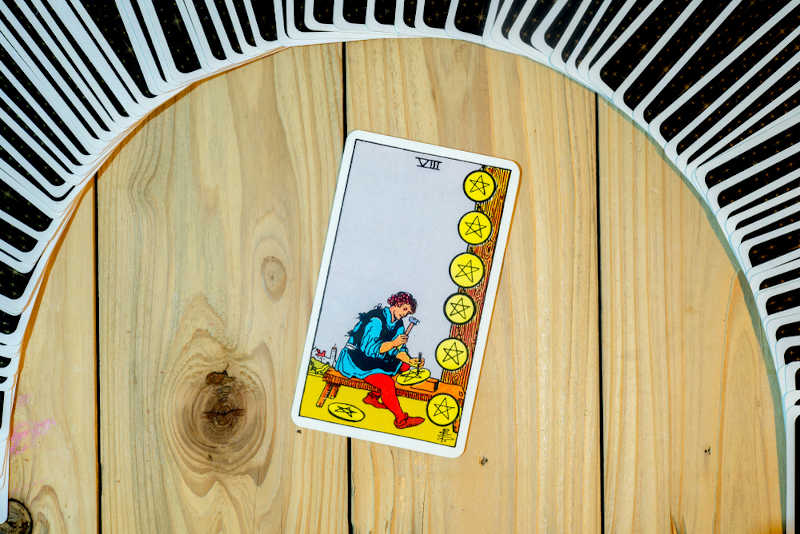 Every suit in the Minor Arcana is a self-contained story, and, like any other story, they follow a progression. By the time we reach the Eight of any suit, we’ve begun to enter the dénouement. This is where things begin moving toward the conclusion, and represents our last opportunity to change direction.

For the Eight of Pentacles, which deals with money, abundance, and work, this means choosing to work toward a goal by enhancing one’s skills.

About Eight of Pentacles

Pamela Colman Smith illustrated the Eight of Pentacles as an artisan at work. He’s dressed in red hose, a blue shirt, and a black apron. He’s sitting on a bench, hard at work chiseling a design into golden pentacles.

Most of the pentacles seem to be objects of pride — he has them hanging above his bench in a position of prominence. Notably, not all of his work is here. One pentacle sits on the ground, propped against the bench, while another lies discarded on the ground.

This suggests that he’s attempting to refine his skills and attain a level of perfection. When one of his works doesn’t meet his standards, he doesn’t hang it up with the others. It’s either put to the side, to be fixed, or thrown out.

This appears to take place outside. The sky behind the artisan is flat and gray, and there’s a castle or town just barely visible in the distance. The artisan has removed himself from other concerns. He’s left the town, and gone somewhere where he can focus entirely on his work.

For general readings, the Eight of Pentacles upright represents work, apprenticeships, enhancing your skills, learning, and diligence. You may be about to go back to school, or enter a period of firm dedication to improving a skill.

In other contexts, it can represent working toward a goal. This card serves as a bit of a warning: It takes a lot of practice to reach an objective, and this practice won’t always be fun and exciting.

If you continue to work, you’ll achieve your desires. The trick is that you have to continue even when things become dull, tedious, or frustrating.

When reversed, the Eight of Pentacles takes on a meaning of wasted time and effort. You may have a goal you want to achieve, but aren’t putting the work toward doing so. If you’re trying to enhance your skills, your efforts might be half-hearted or careless.

Conversely, this card may also indicate workaholism. You may be so dedicated to an objective that it’s creating a lack of balance in other areas of your life. As a result, if you actually achieve your goal without burning out, you may find that it wasn’t worth it. It’s time to re-balance before things get bad.

In a relationship spread, this card can represent working with your partner toward a monetary goal. One of you may choose to go back to school, requiring both of you to figure out how to divide chores, finances, and possibly childcare.

It can also represent going to counseling or otherwise putting work toward improving your relationship.

For single people, this card can represent meeting someone through a learning opportunity, or diligently working on yourself in order to heal past emotional wounds.

The Eight of Pentacles reversed isn’t a great sign for relationships, but it’s a good warning. It can represent dedicating yourself too strongly to work, school, or other things outside of your relationship, and neglecting your partner.

On the other hand, it can also describe failing to put in the necessary effort to improve your relationship. You might want things to work out, but aren’t dedicated toward making that happen.

If you’re single, the message is very similar. You might be working so hard on other aspects of your life that you haven’t left enough space to pursue a relationship. It’s also possible that you aren’t willing to put in the effort to improve yourself or seek out other people.

When it comes to careers, the Eight of Pentacles is very explicit. This card is all about hard work, dedication, and material wealth.

It’s a sign that you’re working hard on your performance and increasing your expertise, and this is going to pay off. This is especially true if you’re self-employed or a small business owner, because it represents building your business or client portfolio.

This meaning carries over to financial readings, as well. It’s a card about building wealth, and hard work paying off. You’re likely to see the fruits of your labors. Even if it isn’t a huge financial windfall, it’s possible for you to enjoy a lot of prosperity right now.

Stay on this path — if it’s been working for you, now isn’t the time to switch to risky investments. Instead, share some of your abundance and experience to help others follow the same path you did.

When reversed in a career reading, the Eight of Pentacles indicates tedium, boredom, and a lack of effort. You might be stuck in a position that doesn’t challenge you or allow you to expand your skillset. You may also be putting in as little effort as possible, or letting the quality of your work fall by the wayside.

Alternatively, you might be on the verge of burnout from working too hard. This might seem contradictory, but no matter whether you’re working hard or hardly working, one thing stays the same: You won’t get what you want with the level of effort you’re putting forth right now.

Work too hard, and your rewards won’t be worth the effort. Slack off too much, and you won’t be rewarded either. This card advises you to find a sweet spot that lets you challenge yourself, learn, and improve.

In a money reading, the Eight of Pentacles reversed hints at trying to get rich quick without effort, or going into debt and forcing yourself to work your way out of it. It’s a sign of potential financial insecurity and long-term losses. This situation is still salvageable, however — be more careful where you invest your money. If something seems too good to be true, it probably is.

Eight of Pentacles: Yes or No?

As a “Yes or No” card, the Eight of Pentacles is a “Yes.” This card is all about putting in the work to get your desired outcome — when it appears in this kind of reading, it shows that that effort is going to pay off for you. You’ll most likely get the outcome that you seek.

On the other hand, a reversed Eight of Pentacles shows the opposite. You might not be working toward your desired outcome, and it shows. On the other hand, you might be putting in a lot of effort in the wrong direction. This card’s a “No.”

The Eight of Pentacles is all about balanced work. In a positive light, it tells you that working hard and actively trying to improve yourself will pay off. In its negative aspects, it cautions against burnout and laziness.

Follow its advice, and you will achieve the prosperity and abundance that you seek.