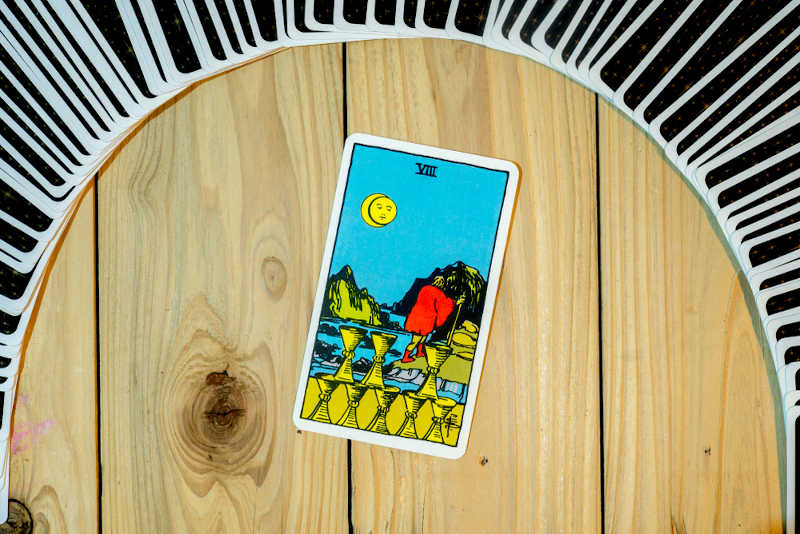 After the heartbreak of the Five of Cups, and the challenging choices embodied by the Seven of Cups, you might be looking forward to a break. There’s no such luck, however — the Eight of Cups is all about movement.

Granted, this may be movement away from your current path, but it’s still movement. This card talks about deep introspection, self-discovery, and knowing when to walk away.

About Eight of Cups

The Eight of Cups is a really intriguing scene. In the Rider-Waite-Smith tarot, it’s illustrated as a figure in a red cloak with a walking stick. We can’t tell much about them, since their back is to the viewer. They appear to be walking away, into the distance.

In the foreground, we can see eight cups. They’re stacked on top of each other, with a row of five on the bottom, then the remaining three resting atop them. It looks almost as if the figure gathered these cups, started to build a pyramid out of them, then got bored and chose to find something else to do.

The background consists of water and craggy mountainous shapes. These may symbolize the potential challenges and obstacles that the walking figure faces in choosing to leave. Even so, this difficult path seems preferable to stacking up cups.

The moon hangs in a starless, cloudless sky. As a symbol, the moon typically represents mystery and intrigue. In the tarot, The Moon represents anxiety, deception, and hidden forces. This underlines the idea that the walking figure is heading into the unknown — it’s night, the road is treacherous, and they have only the moon for company.

When upright, the Eight of Cups generally represents cutting one’s losses. In a positive sense, it’s leaving people, places, or situations that aren’t good for you. In a negative light, it’s disappointment or the desire to run away.

Looking at the central figure of this card, there are some echoes of The Hermit. This person could represent The Hermit at the beginning of his journey, before he’s ascended the mountain.

The Eight of Cups can represent introspection and soul-searching. You may choose to leave your current situation in order to better understand yourself.

When reversed, the Eight of Cups can indicate resignation. You might be choosing to stagnate in a situation out of a sense of obligation, or a fear of the unknown. The trick here is that you likely know that your situation isn’t good for you, but are choosing to stay.

This card can also represent a fear of vulnerability. The suit of Cups deals with the emotions. It’s significant that this figure is choosing to run away from the Cups. You might be afraid of exposing yourself and opening up to others, and are choosing to escape instead.

As a general rule, the appearance of the Eight of Cups upright isn’t a good omen for love or relationships. It can indicate that you or your partner are considering walking away. You might find yourself so emotionally exhausted from the ups and downs of your relationship, that you feel you have no choice to leave.

In truth, this is only a bad omen if you think you have to stay. People generally don’t walk away from relationships that are good or healthy for them. If you can accept that leaving may open a whole new world up to you, then this card can become a positive thing.

If you’re single, you might be feeling exhausted by dating. You may also have some lingering emotional wounds or abandonment issues, which are impacting how you interact with others. It might be a good idea to step back, introspect, and heal before trying again.

If the Eight of Cups reversed appears in a relationship spread, it can represent staying in a relationship out of necessity. You or your partner may no longer want to be there, but you’re staying because of children, religion, family pressure, or monetary issues.

It can also represent maladaptive coping strategies. If serious discussions are taking place right now, one partner may be trying to avoid them or run away. This could be because of emotional exhaustion, or simply due to immaturity.

For single people, this card can indicate that you may be experiencing some commitment issues. This can manifest as pushing potential partners away or clinging tightly out of a fear of abandonment. As with the Eight of Cups upright, it might be time to step back and begin the healing process before you try entering a relationship again.

In a career spread, the Eight of Cups upright hints that you may be feeling unfulfilled, ignored, or as if you’re stagnating in your current position. It might be time to walk away in search of better opportunities. If you own your own business, it could be a good idea to explore a different strategy or direction.

As with the Eight of Wands, this card can also represent business-related travel.

Financially, the Eight of Cups can stand for financial losses. You may find that you need to withdraw your money from losing investments or hire a different financial advisor.

When reversed, the Eight of Cups indicates that you’re staying in a position that isn’t good for you. You might be afraid to leave, or worry that the business won’t be able to go on without you. In either case, you are the only person with the power to fix things here. It’s up to you to make the best choices for yourself.

In a money reading, the Eight of Cups may represent sticking to a business plan, idea, or investment that isn’t paying off. You might feel that you’re “stuck” in place for financial reasons, and fear monetary insecurity if you leave.

Eight of Cups: Yes or No?

The Eight of Cups is a pretty sad card. As far as “Yes or No” readings go, this one is a pretty firm “No.” This card is about abandonment, cutting your losses, and walking away. It might be best to do that here, instead of remaining emotionally invested in a positive outcome that most likely isn’t coming.

Reversed, the Eight of Cups still isn’t a very positive card. It may be interpreted best as either a “No” or “Maybe.” You likely know which choices you need to make in order to lead to your desired outcome — are you brave enough to make them? Like the figure in the card, you need to be the creator of your own destiny here. A “Yes” or “No” depends entirely on your willingness to do so.

The Eight of Cups highlights the need for self-understanding and the strength to make difficult decisions. No matter whether it’s upright or reversed, it tells us that we need to know our own minds and be prepared to meet our own needs.

When we become trapped in situations that don’t allow us to thrive, we are the only ones who can change that. We are the architects of our fate, and we have to be brave enough to step into the unknown.