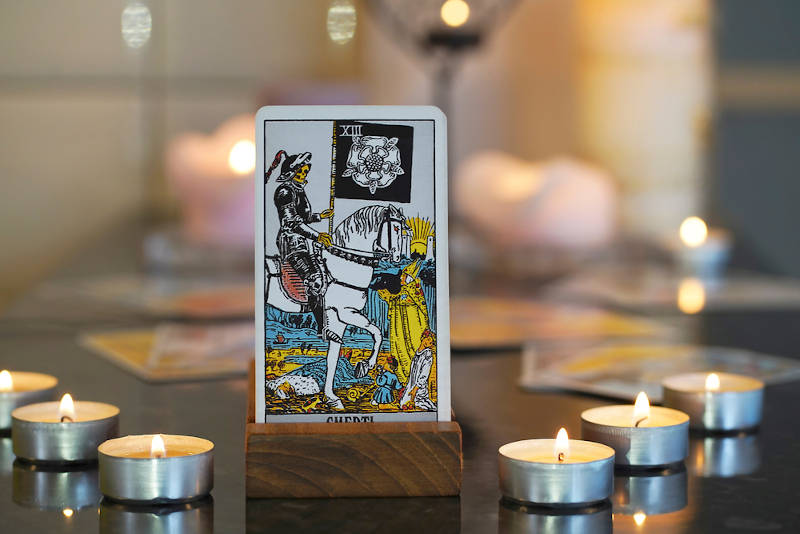 In tarot readings, the Death card is easily the most misunderstood of all of the Major Arcana. It doesn’t help that it’s typically pictured as a forbidding, skull-faced figure.

How many times have you seen tarot represented in media, only for the person receiving the reading to immediately panic as soon as Death shows up? Fortunately, this card doesn’t have to be a cause for major concern.

Before going into Death’s symbolism and representations, it should be noted that very few tarot readers will claim to be able to foresee anyone’s death. The reason for this is that tarot is a snapshot of the energies around a situation at a specific point in time, not necessarily the events themselves.

That means that you’re much more likely to learn that you’ll undergo a major transition that will make you sad, or happy, or uncertain — not definitively told that that transition will be a loved one’s passing.

For this reason, some decks forego naming the Death card at all. The card may simply be marked with the number XIII and no name, or given no markings. This helps expand the card’s interpretation beyond the idea of a physical or metaphorical death.

With that in mind, what is the Death card? In the Rider-Waite-Smith tarot, Death is represented as a skeletal figure in black armor. He rides on a white horse, which hearkens back to descriptions of the Biblical Four Horsemen of the Apocalypse.

In one hand, he holds the reins of his steed. In the other, he holds a black flag adorned with a white rose. White roses are rich in historical, spiritual, and alchemical symbolism. They can represent change, evolution, and transformation, which are probably the most relevant meanings here.

Death’s horse is shown in mid-stride. Beneath its hooves, there sprawls a dead king. Just in front of him are two children, and a golden robed figure in a miter pleading for mercy. These emphasize that Death comes to everyone — nobody, from a king, to a pope, to a child, will be exempt when their time comes.

In the background, there’s a river with a ship and a large waterfall. At the top of the waterfall, there are two pillars. Pillars typically represent some kind of doorway in other tarot cards, and this image is driven home by the sight of the sun rising (or setting) between them.

When Death appears upright, he signifies a major change. Think of him not as a literal death, but as the death of old ways.

If you interpret the sun as setting, he is arriving to mark the end of a cycle and the need to let go. If you interpret it as rising, then he’s here to bring the ending that allows for a new beginning.

Believe it or not, Death is generally a positive omen. It may not seem so in the moment, but, when Death pops up, it’s generally to indicate a change for the better.

All Death stands for is change, and change is what you make of it. (A major change with unpleasant repercussions is more likely to be signified by The Tower.)

When Death appears reversed, he represents resistance. Many people fear change, but you can only fight it for so long. Are you holding on to the past and resisting the changes that will allow you to move forward? How long can you continue doing so?

This card can also represent inertia and a lack of progress. By trying to hold on to how things were, you are keeping yourself in place. This won’t last indefinitely, however, and the changes you experience are only going to feel worse the longer you resist.

Take the initiative now, accept your fate, and move forward into a new day.

In a love and relationship reading, Death still stands for change. If you’re in a relationship, this might be an unwelcome development — you or your partner might be resisting change, and trying to hold on to your relationship no matter what.

Death is a sign that change is coming, no matter what anyone does to try to stop it. You can keep fighting, or acknowledge what needs to happen in order for you and your partner to grow and be happy.

If you’re single, then Death generally represents casting off old beliefs and shedding negative behavioral patterns. Chances are, you were clinging to some ideas that were keeping you from finding love. You’re starting to let them go, and this transformation will ultimately help you.

When reversed in a love and relationship reading, Death’s interpretation isn’t too far from its upright meaning. In this case, the sense of resistance is stronger.

Some change is coming, or should be, and one or both partners are really fighting it. Someone may be staying in the relationship out of fear or obligation, and needs to come to terms with this and let their partner go.

For single people, Death reversed represents all of the baggage that needs to be dropped in order for things to change. You may be holding on to a lot of ideas, beliefs, and behavioral patterns that are keeping you from growing into your best self. It’s time to let these go in order to make room for love in your life.

In a career and business meaning, Death is a warning against settling. If you get too settled on a path that doesn’t really serve you, you may not be able to stay for long.

If you’re staying in a job you hate just for the financial security, it’s time to look for a new job before you’re forced into unemployment. You have nothing to lose but your feelings of stagnation.

In a money reading, Death upright can indicate a financial loss. This won’t be all bad, though — you’ll learn some valuable lessons as a result, and gain new insight into managing your money.

If you treat this change as a learning opportunity, keep your eyes open, and apply the lessons being shown to you, you’ll ultimately come out on top.

When Death shows up reversed in a career and business reading, its meaning is very similar to its upright orientation — it’s just a little stronger and more urgent.

It’s time to free yourself from a stagnant or unfulfilling position while the choice is still yours to make. If you wait too long, you may find yourself in an even worse position.

Death: Yes or No?

Death is another card that is very impartial. As a “Yes or No” card, this makes interpretation a little difficult. It’s not a cut-and-dry answer, and the meaning may depend on your question.

If it relates to making a major change in your life, then Death can be a “Yes.” In other aspects, it may be a “No.” You need to reflect on the meaning of the Death card, and how it specifically relates to your situation.

If Death appears reversed, the meaning doesn’t change much. It’s more likely to be a “No,” but only because reversed Death represents resistance to necessary changes. However, this card can also represent that the outcome of your question is not meant for you to know.

Death’s appearance is often treated with dread, but it doesn’t need to be. Even if the changes he heralds are unpleasant, they’re usually for the best.

Embrace change, don’t give your power away, and allow your hardships and lessons to teach you. The only way to lose here is to resist.