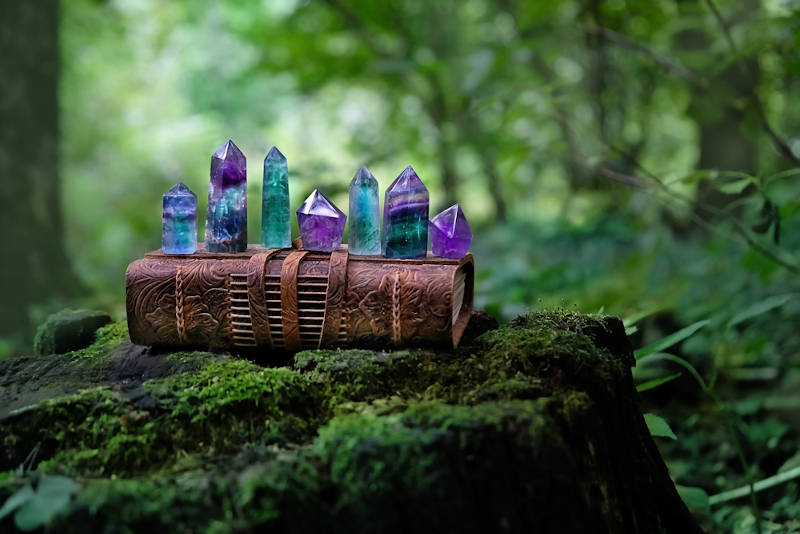 If you’re like most people, you’ve probably had a “what if” moment or two. These are times where you stop and wonder what your life would be like if you’d made a different choice — gone to a different school, accepted a different job, married a different person, or even just had something different for lunch.

There’s a theory that says that every choice we make causes reality to branch into different timelines; one where we made the choice we did, and others where we chose something different. Our consciousness persists in this reality, but those other ones still exist.

Reality shifting refers to the practice of trying to shift one’s consciousness from this reality, into one they’d rather occupy. These other realities can range from fictitious settings, to realities where the shifter simply has a more enjoyable life, or exists as a better version of themselves.

Some people compare it to lucid dreaming or astral projection, and, like them, the process can be aided by using crystals.

Here are some of the best crystals and stones that can help with shifting realities:

Amethyst is known as a wonderful stone for anything related to connecting to the higher self. It’s used in meditation, divination, visualization, and all things tied to the intuitive mind. It can help prepare the mind and body for a reality shift if it’s used during meditation, as well as aid the shifting process itself.

This crystal is particularly helpful for those who use a lucid dreaming method to shift. Hold it, meditate with it, or tuck it under a pillow (or inside of a dream pillow).

Azurite is a stone for meditation. It helps the user connect with their higher self and access divine wisdom while meditating, which can be useful for finding the reality that contains the user’s best self.

For reality shifters, it can help them visualize and connect to their desired reality more easily. Hold it, use it in a grid with other stones, or place it under a pillow while attempting to shift.

Black tourmaline is highly protective. It removes negative energy from the user, and keeps it away. This makes it very helpful for reality shifters who are either attempting to enter a dangerous alternate reality, or who’re afraid of something happening to their physical body while they shift.

It’s a very grounding crystal, so it may hamper the shifting process if used by itself. Combine it with other crystals to make separating the consciousness and body easier.

Celestite is a calming, relaxing stone that’s often used as an aid for sleep and meditation. It’s helpful for those who attempt to shift using a lucid dreaming method.

This crystal is also associated with the higher self, and can facilitate the process of shifting to the best self’s reality. Hold it, use it in a grid, or tuck it under a pillow while reality shifting.

Clear quartz is a master crystal, able to replicate and enhance the abilities of any other crystal. It’s also programmable, which means that the user can hold it, send their energy into the stone, and align its energy with their desired outcome.

This means that a would-be reality shifter can program their quartz to help them align with their desired reality. Hold this stone, use it in a grid, or place it under a pillow while shifting.

Hold it or wear it as jewelry while attempting to shift.

Lodolite isn’t a real term for this crystal — it just means “mud stone.” It’s just used as a kind of shorthand for quartz with inclusions of other minerals within it.

These can include pyrite, dolomite, chlorite, hematite, and many others. As the crystal forms, these inclusions create spectacular miniature landscapes within it. For this reason, this stone is also sometimes called “garden quartz.”

This crystal is often used to facilitate shamanic journeying. For this reason, it can help during a shift to an alternate reality. Hold it, use it in a grid, or place it under a pillow while attempting to shift.

Like black tourmaline, obsidian is a highly protective stone. It’s helpful for those reality shifters who are new to the process and fear something happening to their physical body while they’re “away.”

Its protection also extends to the desired reality. That said, obsidian does tend to be very grounding. In order to keep the user’s consciousness from being rooted to their current reality, this stone should be used in conjunction with other crystals.

Rose quartz is typically a love and compassion stone, but it’s included here for a few different reasons. For one, many people attempt to reality shift in order to pursue a love interest.

Using rose quartz can make it easier to connect to that love interest and follow them to the desired reality. Since it helps with self-love and compassion, it can also aid new shifters who feel intimidated or discouraged by their first attempts.

Hold this stone, use it in a grid, or tuck it under a pillow in order to find a love interest in an alternate reality. Otherwise, meditate with it after shifting.

Selenite (sometimes used to refer to satin spar) is a high-energy crystal that’s simultaneously very calming and relaxing. It can help reality shifters who wish to use a deep meditation method to enter their desired reality.

It’s also very cleansing, so it’s helpful for removing any lingering traces of negative energy or attachments before attempting to shift.

Reality shifting is a complex process that takes time and practice. If it was easy, everyone would be doing it!

These crystals can help with different methods and stages of shifting realities. The more you use them and work with them, the more effective they become.