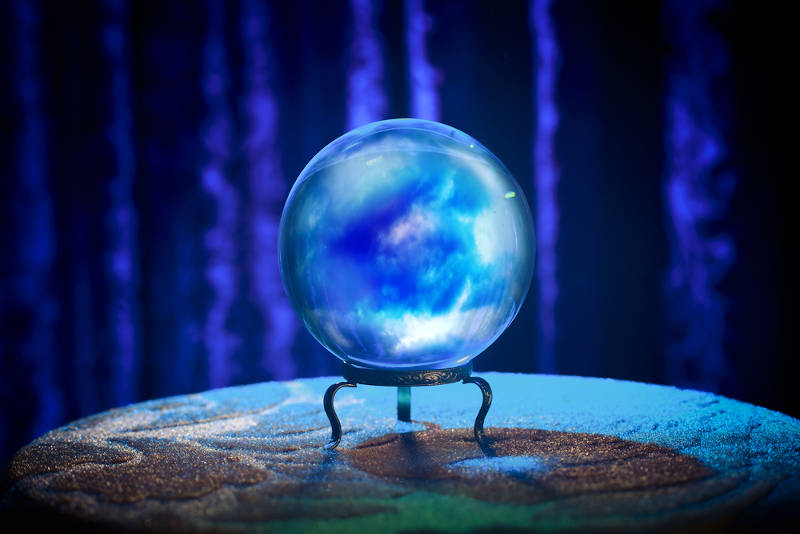 When most people think of divination, a few images pop into their minds: tarot cards, candles, and a crystal ball. Crystal ball scrying is a very old divinatory practice, and one of the most challenging to master.

From the beryl spheres of the ancient druids, to mass-produced glass gazing balls, there are endless ways to tap into the power of crystal scrying.

What is Crystal Scrying?

Crystal scrying is synonymous with crystal gazing. It involves focusing on a crystal ball for divinatory purposes.

While focusing on the crystal, the diviner begins to have visions that appear to take place within it. These can be as complex and vivid as images on a television, or as vague as colors and clouds.

In many cases, the visions are metaphorical, and must be interpreted. Any crystal can be used for scrying, but scrying balls are usually as clear and uniform in color as possible in order to facilitate the visionary process.

How Does Crystal Scrying work?

Crystal scrying can work in a number of ways. One way is by invoking the Ganzfeld effect. This is a neurological phenomenon in which the diviner stares at a field of uniform color.

Since this field doesn’t provide very much visual input, the brain begins to amplify any other available stimuli. This causes the diviner to enter an altered state of consciousness, which causes visions to appear in the crystal.

These visions can vary widely in complexity. Many beginning diviners will see relatively simple things, like clouds of colored smoke. In this case, the color, consistency, and direction of the smoke are all analyzed by the diviner.

Experienced or especially talented diviners may see elaborate scenes. These can be snippets of future events, or purely symbolic in nature.

Some scrying crystals aren’t perfectly uniform or clear. In this case, the diviner may focus on features within the crystal — small inclusions, fractures, rainbows, bubbles of water, shifts in color, or changes in opacity.

These can begin to take the shape of plants, animals, faces, or other objects. Observing the interior of a crystal can also lead to a deep meditative state, which leaves the diviner open and receptive to messages.

A mineral called garden quartz, shaman’s quartz, scenic quartz, or lodolite (“mud stone”) is helpful for this. This crystal consists of clear quartz with inclusions of manganese, chlorite, hematite, and other minerals, which often form the shape of miniature landscapes within the stone. It’s also often used as an aid for journeying work, which is another form of divination.

Since scrying is a highly personal and subjective form of divination, it’s important for scryers to keep a journal of their experiences. This can provide valuable insight into the symbolism of the scenes they see in their crystal balls.

Nobody’s really certain how crystal scrying got its start, but it’s believed that it was with the druids. While cultures all around the world used reflective surfaces for divination, the druids polished a crystal called beryl into small spheres.

After the Roman conquest, crystal scrying fell out of favor until the Middle Ages. At this point, quartz crystal became the material of choice for crystal balls, since it’s colorless and clearer than beryl.

John Dee, famed magician and court advisor to Elizabeth I, used a ball made of rock crystal for scrying.

In the 1950s, a psychic named Jeane Dixon popularized crystal balls once more. She publicly predicted the inauguration and assassination of former President John F. Kennedy.

It’s said that one must keep a crystal ball covered with a cloth when it isn’t being used. This is actually a very important bit of practical advice — if sunlight hits a crystal ball, it can act as a lens, focusing the light and starting a fire.

Witches commonly use an infusion of mugwort in fresh water to wash crystal balls. Mugwort is a powerful divination herb.

Some crystal gazers of old used hollow glass witches’ balls for scrying. These balls were hung in windows by homeowners, and used to trap mischievous or evil spirits to keep them from troubling the occupants of a house. Diviners would use witches’ balls that held the spirits of the dead, in a combination of scrying and necromancy.

Getting Started With Crystal Scrying

Starting out with crystal scrying is simple, but not exactly easy. At its most basic, all you need is yourself, a crystal gazing ball, and a quiet place to focus.

Beginners may also want the help of other tools, including divinatory incense, anointing oil, and candles. It’s also a good idea to keep a notebook at hand for recording your experiences.

Listening to music is not recommended, since any extra sounds in your environment can potentially shape your visionary experience.

To start out, find a comfortable place to sit. Ideally, this will be in a chair, at a table that allows you to place your crystal ball roughly a foot in front of you.

Look into the center of the ball, and let your eyes relax. Don’t stare or focus hard — this will make you need to blink more often. Just let your eyelids half-close.

Allow your mind to relax and quieten. Whenever thoughts appear in your mind, simply be aware of them without fighting or suppressing them, and then refocus your attention back onto the crystal ball.

Ask a question, either out loud or silently to yourself.

After a time, you’ll notice your vision darkening around the edges. This is normal, and part of the Ganzfeld phenomenon. Your optic nerves are relaxing and turning off, and you are beginning to enter the altered state that allows visions to happen.

If this is as far as you get, that’s okay! Remember how it felt, and try to go further next time.

Next, you may notice changes in the center of the crystal ball. It may begin to look opaque, or smoky. It might turn another color. Remember this. If this is as far as you get, write down everything you saw — even if it didn’t look like much. You can still interpret it for information.

How did the color relate to your question? If there was smoke, did it appear to drift up or down, left or right?

As you gain more experience, you may begin to see more elaborate and vivid scenes. If you’re lucky, they may show you the exact answer you seek. Otherwise, you may have to analyze them the way you might interpret a dream.

Did they contain any animals? Were there any dominant colors? What objects or symbols stood out? What do these things mean to you, and how do they relate to your question? Write down everything.

It only takes a few minutes to learn how to scry with a crystal ball, but it can take a lifetime to master. If your first few attempts don’t get very far, don’t worry. Chances are, you’ve still seen something that holds the information you seek.

Crystal ball scrying has waxed and waned in popularity throughout the ages, but it has always been one of the favorite tools of history’s most powerful magical figures.

No matter whether you choose a small rock crystal sphere or a large glass gazing ball, you can use it to hone your divinatory skills and uncover secret information.