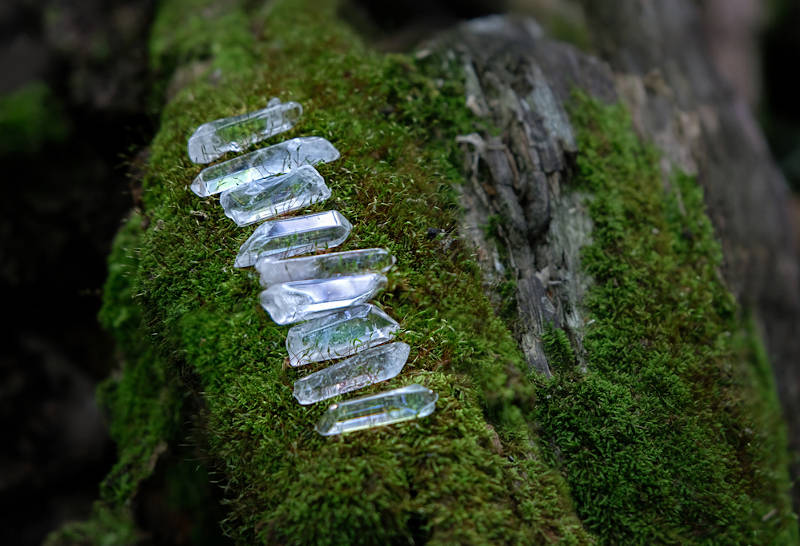 Clear quartz is simultaneously one of the most beautiful and common crystals. It can appear as stunning single crystals, castle-like elestial formations, glittering geodes, or even plain-looking rough stones.

While some people find clear quartz less visually striking than its colorful counterparts like citrine or amethyst, they’re missing out — this crystal’s power lies within its lack of color.

Quartz is composed of silicon dioxide, and is the second most abundant mineral in the world. It occurs everywhere — you can probably step outside of your home and pick up a clear quartz rock right now.

Clear quartz lacks color because it doesn’t contain impurities. When atoms of iron, aluminum, or other elements are trapped within quartz’s molecular structure, they create the vibrant yellows, purples, greens, and other colors associated with various gemstones.

Due to its abundance, hardness (about 7 on the Mohs scale), and durability, quartz has been one of the most popular materials for making jewelry and carvings throughout history.

Clear quartz is sometimes called a “master healer.” Physically, it’s said to help with a variety of conditions, ranging from chronic pain, to immune problems, to dental issues.

It’s believed to amplify energies, which makes it helpful for people who feel sluggish or fatigued, or whose organs or body systems need stimulating.

Emotionally, clear quartz is said to help people achieve balance, awareness, and acceptance. It has a cleansing, purifying effect on the aura, which can help those who are sensitive to other people’s energies.

Healers aren’t the only ones who consider clear quartz a “master” stone — many magical practitioners do, too.

Clear quartz is considered a suitable substitute for any other stone in a spell. It’s also energetically programmable, meaning that the user can align the crystal’s energy with any intention they desire. While other crystals have specific areas they can help with, clear quartz is universal.

Some types and formations of quartz have specific metaphysical properties. Quartz crystals with small, triangular markings on their faces are called “record keeper” stones, and are said to transmit knowledge.

Quartz geodes are said to help with friendship, group bonding, and other activities involving multiple people.

Long, singular crystals with an intact point are used to direct energy. Herkimer diamonds, a kind of double-terminated quartz specifically from Herkimer County, New York, are said to be particularly high-energy forms of this crystal.

Some quartz has small rainbows, internal fractures, or even bubbles of water, all of which have their own, in-depth meanings and energy.

Quartz is so ubiquitous that tracking its history and folklore is a daunting task. Humans have been using this crystal ever since they developed the skills for making stone tools — as their stoneworking skills progressed, so did the ways that early humans used clear quartz.

It has been found in jewelry, statues, and everyday objects. The Celts used spheres of it to heal diseases, especially in sheep and cattle. Some cultures viewed perfect crystals as living beings that required offerings to sustain them.

In ancient Greece, clear crystals were believed to be ice that had frozen so hard, it could never thaw. The word “crystal” actually derives from “krystallos,” a Greek word meaning “ice.”

Uktena, a dragon-like creature spoken of by the Cherokee (Aniyvwiya) people, is said to have had a blazing six-sided crystal set in its head — Ulun’suti.

Clear quartz was used to make some famous crystal skulls, which were originally said to be pre-Columbian Mesoamerican artifacts. According to some, these skulls are living entities that can link up with each other to form a kind of spiritual computer. The skulls were hidden around the world and entrusted to various guardians by an advanced ancient civilization.

Unfortunately, there is little evidence of legends about crystal skulls within the cultures they supposedly came from. Later analysis of the skulls themselves found that they were most likely manufactured in the mid-19th century onward, using modern stone carving tools and methods.

How to Cleanse Clear Quartz

Clear quartz is an excellent stone for beginners because it doesn’t require very specialized handling. It’s hard, fairly durable, won’t dissolve in water, and won’t be bleached by sunlight. For this reason, most conventional methods for cleansing a crystal’s energy will work just fine.

Some methods for cleansing Clear Quartz include:

That aside, it should be noted that long exposure to intense sunlight can make crystals very hot, and, especially in the case of crystals with water inclusions, cause breakage.

Clear quartz spheres, in particular, should be used in bright sunlight with caution — their shape allows them to concentrate solar rays, much like the lens of a magnifying glass. This can cause burns or even start fires.

If you choose to cleanse a clear quartz using a singing bowl, don’t place the crystal directly in the bowl. The vibrations and frequencies of the sound can cause it to shatter.

Getting Started With Clear Quartz

You’ve chosen a crystal that resonates with you. Maybe you went to a metaphysical shop, maybe you found a particularly appealing stone on a hike. You’ve cleansed it, maybe even meditated with it a little bit. Now what?

Clear quartz is a fantastic crystal to start with. As was mentioned above, it’s a suitable magical substitute for any other stone, and it’s not particularly delicate. Since it’s programmable, you can use it for anything your heart desires. Fortunately, programming a stone is fairly simple.

First, make sure your stone is properly energetically cleansed. This will remove any traces of energy from people who may have handled it before you did. Think of it like the energetic equivalent of reformatting a computer — you’re restoring it to its default state and getting it ready for its next job.

Next, find somewhere quite where you can concentrate. The fewer distractions, the better. Sit comfortably, and take your crystal in your dominant hand. This is your projective hand, the hand you use to send energy out.

As these two energies mingle inside of you, visualize your intention for this stone. Do you want to dedicate it as a magical tool? Will you use to it heal a specific ailment? Are you going to use it to attract luck, or provide energetic protection for you?

Keep this in your mind as you send energy down your right arm, into the stone. Feel the crystal “filling up” with your intention, amplifying and aligning itself with your energy.

When you feel that the crystal has taken up all that it can, it’s probably gotten the message. Set the stone down, and give your hand a good shake to break the connection. If you like, you can try picking up your clear quartz with your left hand. Does it feel different from when you started? Does it seem lighter, heavier, tinglier, or buzzier?

At this point, you can use your clear quartz however you wish. Place it on your altar to amplify the power of your spells. Keep it with you when you sleep, or carry it with you if you need protection when you go outside.

Clear quartz is one of nature’s most abundant, powerful magical and healing tools. If you ever find yourself daunted by the number and variety of different crystals out there, don’t be fooled — clear quartz is just as special and powerful as more exotic stones.

Choose yours carefully, cleanse it, program it, and care for it, and you’ll have an ally that can help you for a lifetime.