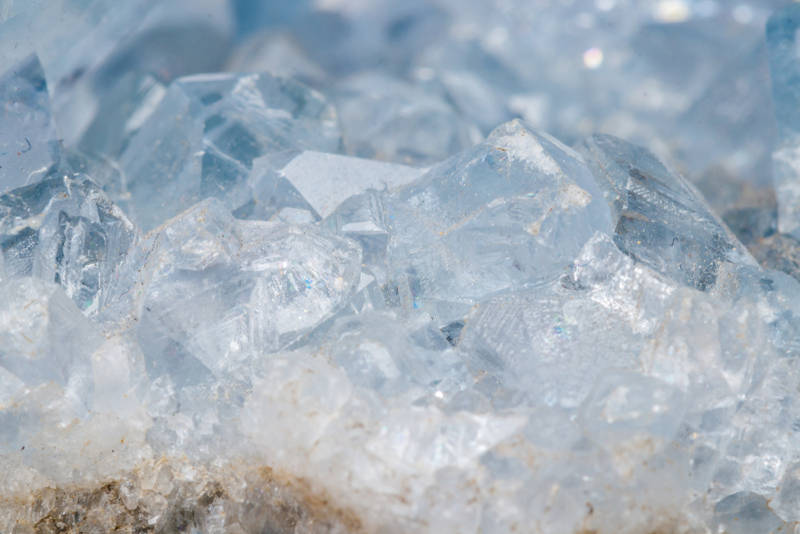 Celestite, or celestine, is a blue-gray to reddish crystal found all over the world. It’s even found in every imaginable form, from the skeletons of minute protozoa of the species Acantharea, to spectacular geodes.

Magical practitioners and crystal healers alike love this stone for its peaceful energy, and it can be found in everything from altar pieces, to healing jewelry.

Celestite is a strontium sulfate mineral that’s typically found in sedimentary rock formations. While most celestite specimens for sale are blue gray, this crystal can also be white, brown, gray, pink, green, reddish, or clear.

This stone is relatively soft, with a hardness of only 3.5 on the Mohs scale, and may be damaged by water.

The world’s largest unearthed geode is a celestite geode roughly 35 feet (11 meters) in diameter. It’s located in Ohio, and has been turned into a crystal cave for exhibition. Some of its crystals are estimated to weight as much as 300 pounds (140 kg) each.

Emotionally, celestite is a crystal of peace. Keeping a large specimen in common areas of the home is said to help prevent arguments and maintain family harmony.

Physically, this crystal is used for pain and detoxification. Crystal healers say that it helps release muscle tension, just as it does emotional tension. Some use it to relieve diseases of the mouth and throat, including laryngitis and tooth decay.

It’s also said to help improve digestion, relieve disorders of the eyes, and fight all kinds of infections.

Celestite’s peaceful energy carries over into its magical properties. This crystal is used for channeling, communicating with benevolent entities, and dream recall, making it a valuable aid for those seeking to have prophetic dreams or attempt astral travel.

While this crystal can seem nothing but calm and gentle on the surface, its energy can be highly stimulating when used in the right way. It’s a stone for accessing the higher plains and facilitating spiritual development.

Following the principles of color magic, celestite is a very versatile stone depending on its hue. Blue to blue-gray stones are, unsurprisingly, useful for peace, healing, and uncovering the truth. Pink can aid with friendship and love of all forms.

Green may be used for plant magic, growth, prosperity, and fertility. Brown stones may be used for Earth-element magic and working with animals. White crystals are for spirituality and cleansing. Reddish crystals may aid with workings for strength, vitality, passion, and ambition.

In chakra work, the color of a crystal similarly dictates its use. Blue and blue-gray stones are used with Visuddha, the throat chakra. Wearing a celestite stone near this area can help open and unblock it, relieving problems with communication, speaking one’s mind, and physical ailments related to the mouth and throat.

Pink and green may aid Anahata, the heart chakra, and relieve emotional turmoil. White and clear stones are suitable for Sahasrarah, the crown chakra, which is tied to spiritual matters. Reddish stones can work with Muladhara, the root chakra, which relates to survival and basic needs and serves as an energetic gateway to all of the other chakras.

How to Cleanse Celestite

Celestite isn’t the easiest crystal to cleanse. It’s likely to need it frequently, since it’s typically used to deal with strong, negative emotions. Unfortunately, it’s also damaged by water, fairly soft, and will fade in sunlight. Therefore, you might want to use one of the following energetic cleansing methods instead.

Some methods for cleansing Celestite include:

Getting Started With Celestite

Since celestite is abundant, it’s not too difficult to obtain a specimen that was mined using ethical practices and labor standards. If your supplier can’t vouch for the origins of their stones, look for another one — not only will you avoid supporting unsustainable and damaging crystal harvesting, you’ll lessen the chances of accidentally purchasing a fake stone.

If possible, try to purchase your stone in person. This serves a dual purpose: On one hand, celestite is delicate, so you’ll be able to avoid buying a crystal with visible cracks or other signs of fragility. On the other, this will let you handle your stone before you take it home. That will let you get a sense of whether a stone is right for you.

If it feels pleasant, calming, or even tingly to hold, that’s a good sign. If it feels unpleasant, or makes you feel oddly sad or anxious, try a different stone. If you don’t feel anything, that’s fine — you can use your other senses to choose the stone you’re most drawn to.

When you have your celestite in your possession, it’s time to cleanse it. Your crystal has been through a lot, and passed through many hands. It’s also likely picked up bits of stray energy all along the way. Cleansing will remove these, returning the celestite to its energetic baseline so you can work with it without being affected by negativity from external sources.

After cleansing your crystal, you can get down to working with it. If you’ve purchased it to use as a healing tool, try placing or wearing it on whatever part of you needs healing and noting the effects.

If you plan to use it as a magical tool, you might want to use it for dream magic. Shortly before bed, hold it in your non-dominant hand, close your eyes, and feel the crystal’s energy mingling with yours. State your intention out loud. It can be as simple as, “Tonight, I intend to remember my dreams,” or, “It’s my intention to have a lucid dream.” Place the stone on your nightstand or under your pillow. When you wake up, immediately write down anything you’ve noticed about your dreams.

If you’ve ever had the privilege of handling or wearing a piece of celestite, you know the calming, balancing energy of this crystal. No matter what you intend to use it for, take care of it and handle it often. The more you get to know its energy, the more powerful it will be for you.