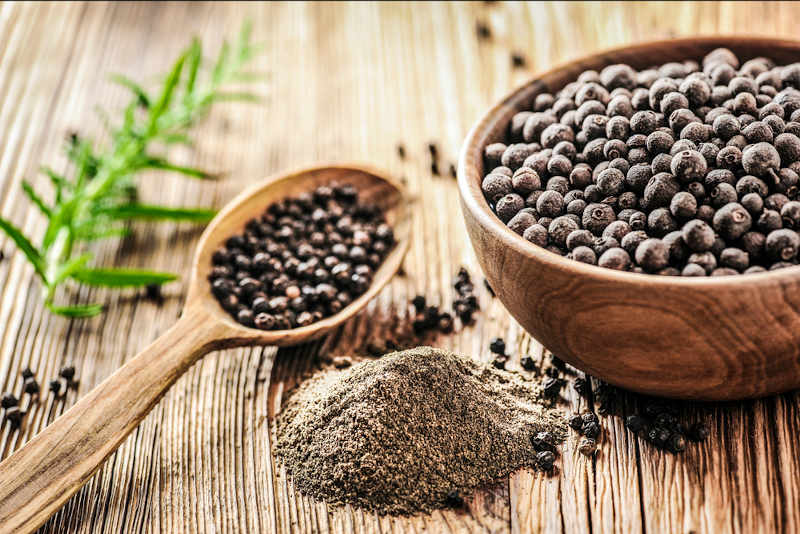 Black pepper (Piper nigrum) is one of the best-known spices in the world. A native of India, it is now produced in Malaysia, China, Vietnam, Indonesia, Brazil, and Ethiopia. These berries lend a distinctive flavor and a little bit of heat to dishes — and, as it turns out, to spells and potions as well.

As a hot spice, black pepper is most often found in recipes for protection and banishing. It’s often treated as a somewhat milder version of cayenne pepper.

While its primary uses are for banishment, hexing, and other spells to harm or chase away entities, it’s occasionally used in tiny amounts to “heat up” spells for sensuality and passion. Ginger and clove are probably more suitable for this, however.

Magically, it’s best to use pepper by scattering it. This is at least partially a practical consideration — burning hot spices aerosolizes their volatile compounds, which will burn the eyes, noses, mouths, throats, and lungs of anyone who breathes them in.

They’re also not very suitable for infusing into anointing oils, except for in very limited amounts.

Because it can burn the tongue when used in large amounts, black pepper is sometimes added to magic to stop gossip.

Adding pepper to spells helps speed them up, as hot spices generally do. In hexing, it gives spells an added kick.

Black pepper is ruled (perhaps unsurprisingly) by the planet Mars and element of fire.

Black pepper contains the antioxidant compound piperine. These help protect cells from free radical damage. Some free radicals are natural, and even helpful — these are produced when you do things like exercise or eat food.

Others can be produced from exposure to certain pollutants or solar radiation. Excessive free radical damage is associated with cancer and heart disease.

Piperine may also help the body process sugar. In a study of people with insulin resistance, taking a supplement containing black pepper for eight weeks improved their insulin sensitivity.

An in vitro study of cancer cells found that black pepper also enhanced the effectiveness of chemotherapy for aggressive breast cancer.

It should be noted that pink pepper (Schinus molle or Schinus terebinthifolius) is not related to black pepper. It’s actually a member of the cashew family. People who are allergic to tree nuts may react to pink pepper, but not black pepper.

Black pepper can cause topical irritation. Avoid touching your eyes or mucous membranes after handling it.

Large amounts of black pepper can cause gastric pain or distress.

This spice is generally safe in the amounts you’d use in food. If you have other health conditions, or are taking prescription medication for any reason, consult your doctor before consuming larger quantities of black pepper.

Black pepper got its start in South and Southeast Asia. Many classical sources mention the lost city of Muziris in Kerala, India, which was famous for exporting pepper and other spices. Black pepper was so highly prized, it was sometimes used as a form of currency.

Black pepper was first mentioned in Chinese texts in the 3rd century CE, though it’s highly likely that China was familiar with it from the 2nd century BCE onward.

Pepper was part of the mummification rituals of Egypt. Shortly after his death, Ramses II’s nose was packed with peppercorns.

When Alaric, king of the Visigoths, besieged Roma in the 5th century, he demanded 3,000 pounds of pepper as part of its ransom. After the fall of Rome, the pepper trade was largely taken over by Persia and Arabia.

It was once thought that pepper was so valuable to Europe because it helped disguise the taste of spoiled meat in the time before refrigeration.

This is not very likely, as pepper was a luxury product — if someone could afford pepper, they could likely afford fresh meat, too. Even though refrigeration wasn’t available, people also had other ways of preserving meats.

Getting Started With Black Pepper

It’s highly unlikely that most green witches will be able to grow their own black pepper, whether indoors or out.

It only grows in tropical regions and, after harvesting, requires a somewhat lengthy par-boiling and drying process to yield the small, dark peppercorns with which we’re familiar. Even so, there are plenty of ways to get started working with this spice.

The easiest beginner’s spell using black pepper is to grind whole peppercorns with a mortar and pestle or peppermill. As you grind, thank the pepper and ask for its help protecting your space. When you have about a teaspoon or two of ground pepper, carry it through your home.

Sprinkle a pinch in the corners of each room, each time asking the pepper to guard your space, possessions, and all who dwell within your home’s walls. If you wish, you can also combine the black pepper with other protective herbs, and grind them all together.

Black pepper’s value as a luxury item still lives with us in phrases like “peppercorn rent” — or a nominal fee paid for something as a legal technicality. While this spice is now popular enough for many of us to take it for granted, that doesn’t diminish its power as a magical and healing plant ally.