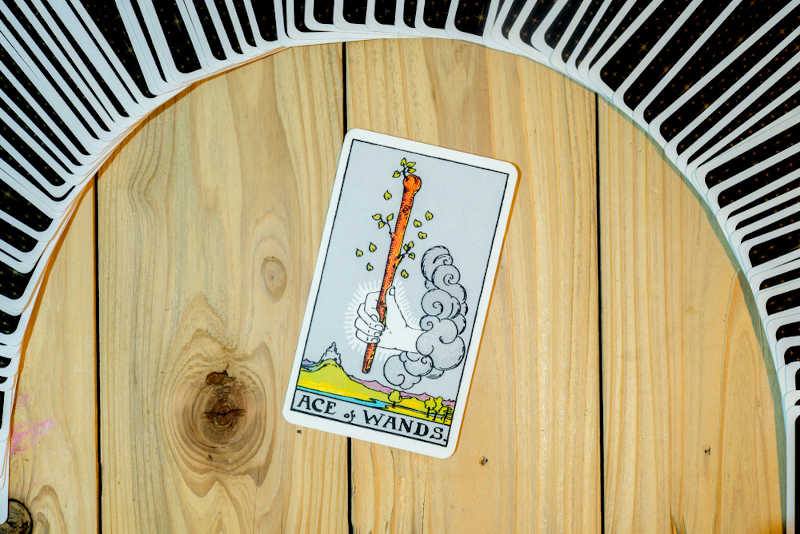 Aces play a unique role in tarot decks. Unlike a regular playing card deck, they are always regarded as the first of their suit — never the last. Their value is always as a one, not an eleven. That means that, regardless of the suit they represent, they universally mark a new beginning or opportunity.

About Ace of Wands

Though aces are all about newness and beginnings, their meanings begin to differ when you consider their suits. Each suit corresponds to a different element, and each element governs some part of the human experience.

Wands are traditionally considered the suit of Fire. This ties them to willpower, inspiration, and creativity. Picture the suit of Wands as the embodiment of one’s “inner fire,” the spark that lights you up and drives you forward in life.

In the Rider-Waite-Smith tarot deck, the Ace of Wands is illustrated as a hand holding a wand, reaching from a cloud. In contrast to the gray cloud and overcast sky, the hand appears luminous — it glows with some kind of divine light.

The wand is sprouting. It isn’t depicted as a carved, painted, dead stick. Instead, small leaves grow from twigs on the tip and sides.

Despite being indisputably a wand, not an intact tree branch, it continues to grow and flourish. (In some other decks, the Ace of Wands is shown as a hand holding a torch.) Below the cloud and hand, a river winds through a peaceful, mountainous countryside.

When upright, the Ace of Wands is a motivator. The gray clouds and overcast sky represent ambiguity and uncertainties, and this glowing hand is appearing to hand you the opportunity to speak from your heart.

If you’ve had a creative project or idea in mind, this card is telling you to pursue it. If you don’t, expect to receive some unexpected inspiration soon.

Unlike The Fool in the Major Arcana, this is typically not a new beginning that marks a major life turning point. The Ace of Wands still represents the excitement and optimism of a new journey, but relates to a specific idea.

If you’ve been wrestling with the unknown, and struggling with uncertainty about whether or not you should pursue a creative opportunity, this card is a resounding, “Yes.”

When reversed, the Ace of Wands can point to meandering thoughts and a lack of inspiration. You may be feeling as though you lack direction, or, like the mountains that determine the course of the river below, there are obstacles keeping you from realizing your goals.

These are commonly a lack of excitement or ideas, but can also mean delays or disappointing news. Whatever the case, you aren’t taking on a new project (or continuing an existing one) with the kind of optimism it deserves.

Sometimes, this card may relate to procreation as well as creativity. It can represent a miscarriage or difficulties with conception.

As a card related to the element of Fire, the Ace of Wands points to warm, sensual, intimate developments in one’s love life. If you’re already in a relationship, this can mean entering a new stage with your partner — maybe buying a house, having a child, or just reigniting the spark you had in the beginning.

If you aren’t in a relationship, this is a good omen for beginning one. Anticipate a period of excitement, passion, and spontaneity. You may already have a potential partner in mind, in which case this card is advising you to take the initiative and ask them out.

Reversed, the Ace of Wands isn’t a good omen for love. It can represent short-lived passion, delays, setbacks, disappointments, and a lack of enthusiasm.

This may be because both partners have other things on their respective plates right now, but something is keeping them from experiencing the kind of heat and excitement they should be feeling for each other.

In a career or business reading, the Ace of Wands upright is a wonderful omen. It represents good news, optimism, and enthusiasm. If you’re currently job seeking, expect an exciting new offer soon. If you have a long-term job already, expect a project that will spark your interest.

Financially, the Ace of Wands can indicate an end to a period of money trouble. This likely won’t be in the form of a huge influx of cash, but you’ll be able to enjoy more security than you did before.

There are two things to remember, however: One is that the suit of Wands is tied to Fire and creativity. The suit of Pentacles is the one that deals with Earth and prosperity.

The other is that the Ace of Wands is the very beginning of its suit, not the end. This means that you’ll have to spend wisely and continue working to maintain this level of prosperity.

Play your cards right (no pun intended), and you’ll be able to live comfortably. If you don’t, you may experience setbacks and delays once again.

The Ace of Wands reversed speaks of a lack of inspiration and enthusiasm. If you have a job, it’s like that it’s begun to feel like a grind. It probably doesn’t fuel your creativity like it once did, and you may have even begun dreading having to go in every day.

If you’re currently unemployed, then you might be experiencing delays and difficulties finding one. Chances are, you’ll receive some disappointing news.

Financially, the Ace of Wands indicates the beginning of a negative trend. You’re likely to see your finances start to dry up, or more bills come in.

You’ll have to tighten your belt to get through it, and it’s not a good idea to make any new investments right now. You’re more likely to get hit with losses and unexpected fees than you are to make money.

Ace of Wands: Yes or No?

In a simple “Yes or No” reading, the Ace of Wands upright is a “Yes.” This card has a lot of fresh, positive energy, so it indicates a similarly positive answer to your query.

However, the Ace of Wands reversed isn’t an automatic “No.” This card tends to indicate that now isn’t the right time to get a clear answer, or the outcome isn’t able to be neatly categorized as a “Yes” or “No.”

The Ace of Wands is a good sign for all things related to creativity and drive. If you’ve been in a rut in any area of your life, then this card appears to let you know that things will change. When reversed, it serves as a warning of delays and disappointments.

While the Minor Arcana may not have the earthshattering impact of the Major Arcana, it provides very valuable advice and encouragement.